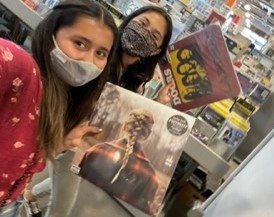 Sophia Alonzo is one of the many excelling freshman on the Mt. SAC ECA campus.  She enjoys playing the guitar, the piano, reading and writing, swimming, and running.  Sophia is a very social person who is not afraid to go after things she wants, if she wants something she will go out and get it.

One of her dreams is to someday become a lawyer or an attorney.  “I want people to get what they deserve and for people to have a voice,” Sophia stated.  She is also thinking about becoming a history professor but she feels that she is currently more interested in law.

Sophia is a big fan of music, she enjoys listening to it constantly and sometimes even playing it on her guitar or piano.  She said, “I love music!  I usually listen to different types of rock, such as alternative or punk.”  What she loves about it is the power of music. She stated, “Music can change my mood quickly, from sad to happy and vice versa.”

Sophia also has the gift to be able to make music herself.  She said, “I also like being creative with the guitar or piano and making songs out of them.”  When playing the piano she likes to play songs made by the classical greats such as “Bach, Mozart, Debussy, and Beethoven.”

On her guitars she plays an interesting variation of styles.  On her electric guitars she enjoys playing different styles of rock such as alt and punk.  On her acoustic guitar she will play softer songs because it “fits the vibe.”

Sophia has even made her own songs with her instruments.  She will incorporate many different styles into her music similar to what she plays.  One of her struggles with her songwriting is naming her songs.  She stated, “Naming songs for me is really difficult or super easy for me.”  She said that the song’s meaning is either laid out perfectly in the lyrics or sometimes you really have to dig through it to find the meaning which then makes it difficult to get an easily understandable title without limiting it’s potential.

She has many accomplishments but one of her most prized ones is running a half marathon in Malibu.  The race started at 7am and they had to arrive earlier to get prepared for the race.  She said, “I was there at around 4am at a beach in Malibu, it was beautiful because you could clearly see the stars and constellations.”  Sophia said that she was nervous at the start but then asked herself, “Why? I’ve trained for this for a good amount of time, I’m as ready as I’ll ever be.”  From the start to finish she remained strong and kept going and ended up with a good finishing time.

Sophia is not afraid to present her thoughts and ideas, Ms. Bell loves Sophia’s “Outspokenness” and she gave an example of a time where she was in a book club where the other members strongly disliked this book while Sophia loved a certain part and fought her fellow club members “every day about how they should love this book.”  In the short time Sophia has been in Ms. Bell’s classroom, Ms. Bell has noticed many strong traits about Sophia, and strongly believes that Sophia Alonzo “is going places.”

She is thought highly of by her friends too. Freshman Audrey Arce stated, “We met in 6th grade history class and became instant best friends.”  They do lots together such as baking and riding bikes.  She said that Sophia will just cheer everyone up if they are having an off day and will always make you laugh and be a whole lot happier at the end of the day. Audrey hopes to have Sophia as her best friend and to continue having fun times with her forever, “Sophia is such an important person in my life, she is practically a sister to me.”

Sophia is definitely many different things, but she believes that she is defined by her “fun and energetic personality.”  She is also very appreciative of having people feel comfortable around her.  She said, “People seem so comfortable talking to me and I never thought of myself like that so it’s really comforting to know.”

Sophia Alonzo is a very talented, diverse, and energetic person and is someone who wants to be remembered as “the person who didn’t give up when things got hard.”  She is someone who will always have a goal and a dream, and she will jump right in and not worry about failure, but only focus on the success.