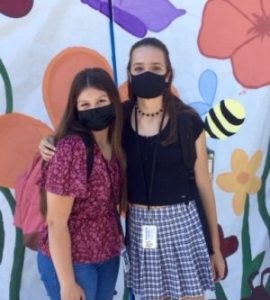 Jensen Barrett is 14 years old and a freshman currently attending Mt. SAC ECA.  In her free time she enjoys baking, roller skating, art, and talking to her friends.  In this article you will learn about the person, friend, and twin she is.

She has a twin brother, Jackson Barrett, who is also a freshman at Mt. SAC ECA (and is currently writing this article).

“ We have always had a great relationship with each other ever since we were little.” Barrett stated

She often wonders what it would be like not being a twin.  She thinks she would be lonely without him, because he is her “best friend” and she enjoys always being able to talk to him.

They have only been friends since the beginning of this school year but they talk about everything that happens from school that day to their everyday life.  One of her favorite things about Jensen is simply her personality.

Jensen is also quite the student, Teacher Ms. Yao said “She is an awesome student because she always does her best with any task or assignment.”

Jensen takes two classes taught by Ms. Yao, CCR and PE.  When she is finished with her work she “always tries to help others when she can.” Ms. Yao also stated.

When she gets home she loves to bake, one of her favorite things to bake are chocolate chip cookies.  These cookies contain a perfect mixture of chewiness and crunchiness in each bite.

Cookies aren’t the only thing she makes. She also loves to make cakes and cupcakes too, she makes a carrot cake that can become someone’s favorite dessert in the first bite.

She is not only a baker, she has also accomplished many things including a black belt in karate and earning the privilege of dancing en pointe in ballet.

She is still continuing to dance in ballet but no longer participates in karate.  She has been in ballet for over 11 years and was in karate for about 6 years.

Some of her future goals include visiting Paris, France and someday becoming a fashion designer.  If she ever goes to Paris she would love to explore the sights and experience the many different fashion types.

She has always loved drawing dresses and clothes for as long as she can remember, so one day during one of her drawings it came to her, the idea of doing this for a living and ever since then it has been her dream to do just that.

Before the idea of a fashion designer one of her previous dream jobs was to become a nurse.  Some others that she had thought of were a physical therapist, and the thought of a professional ballerina had occurred but one of her longest aspired occupations was a teacher.

If she became a teacher she would’ve enjoyed teaching kindergarten.  She stated “I have always loved being around little children and I have a lot of patience for them.”

Apart from being a black belt, a ballerina, and a baker, she is most appreciated as a twin, and a friend.