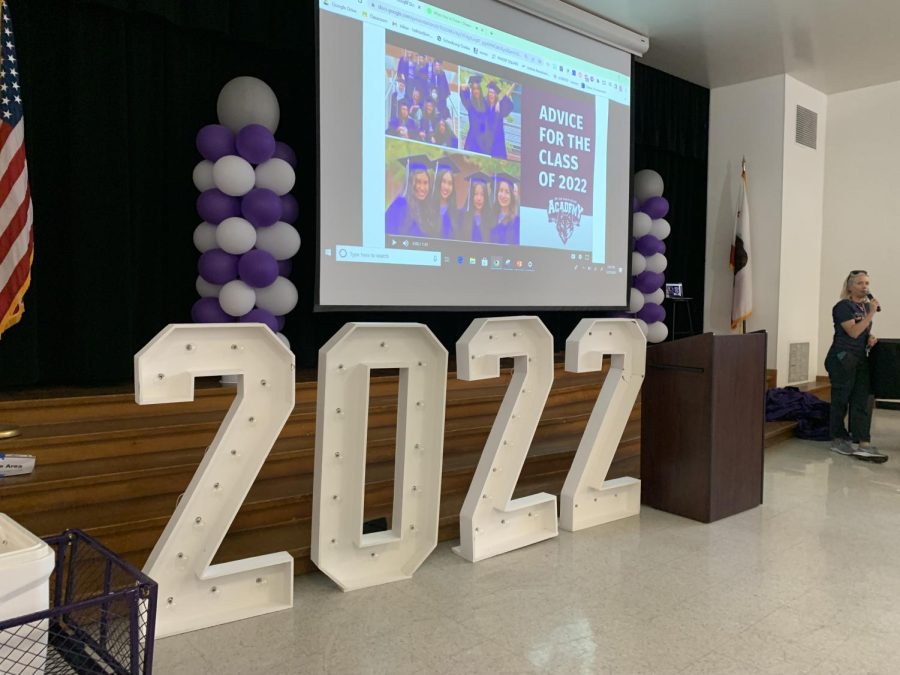 History Teacher Ms.Wilcox announces the film they will be watching.

Our very first generation of graduating seniors here at Mt. SAC ECA celebrated their future plans with each other. Class of 2022 shared their journey two Fridays ago on May 27th as the first graduating class of Mt. SAC ECA with each other, cheering each other on as they enter the next chapter of their lives.

“It really was a day to celebrate everyone for achieving this milestone and to celebrate their decisions of where they’re going to college, what trade schools they’re going to, if they’re even taking a break,” described Mt. SAC ECA History Teacher Ms. Wilcox. “Celebrate it, you guys made a choice, you made a decision, let’s get together and honor that.”

Held in the MPR at Mt. SAC ECA during the 6th-8th period where the seniors celebrated with treats, a movie and many pictures. “We made fresh popcorn, gave out free beverages, booster club gave out some snacks and were selling little stuffed timber wolves with graduation caps that were really cute,” said Ms. Wilcox. Apart from snacks, seniors were able to do a variety of activities such as coloring, taking pictures with their college banners, signing yearbooks, and more.

“My friends and I mostly talked about which colleges our classmates were attending, how graduation would carry out, and enjoying the event,” said current senior Natasha Wong from Mt. SAC ECA.

National Decision Day is celebrated on May 1st, but MECAs was originally planned for May 13th. That was then switched to May 27 due to other activities such as summer social and conflicting state testing schedules. “Seniors don’t make their decisions that early. A lot of seniors made their decision [on] Decision day, on May 27th” explains Ms. Wilcox.

With many heading off to colleges such as Mt. SAC, Cal Poly, UCLA, Berkeley, UC Riverside, and more, “Decision Day was important to celebrate each and every graduating student no matter where they’re going or what they’re doing after graduation,” stated Natasha Wong. With graduation approaching on June 7, seniors took this day to reflect on their time here at Mt. SAC ECA, and talk about their next step in their journey and wonder where it might take them next.