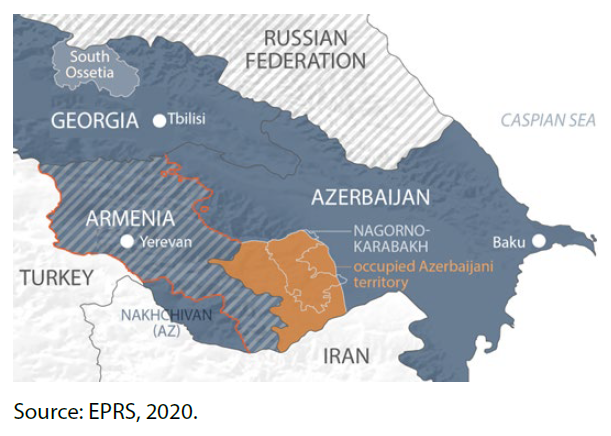 In the South Caucasus there are two countries, Armenia and Azerbaijan, that have been rivals for almost 100 years that have led to bloodshed and war over ethnic conflicts, in a region known as Nagorno-Karabakh. Its a mountainous region in Azerbaijan and is internationally recognized as a part of Azerbaijan, although it has been occupied by Armenia for years.

After World War I, the Russian Empire had collapsed, causing Armenia and Azerbaijan to become independent for a brief period of time. Almost immediately however, they started a war over ethnic conflicts because the Nagorno- Karabakh region was inhabited by Armenians although it was a part of Azerbaijan.

The end result was the Soviet Army conquering and taking over both Armenia and Azerbaijan. Once the Soviet Union was fully formed, the conflict ended as the Soviets handed statehood to both countries. Being part of a single union ended the need for conflicts between the two. Peace was broken when conflicts sparked up again in 1988.

For the most part, control was maintained with the Soviet Military suppressing both sides with the goal of keeping the union together. Unfortunately the Soviet Union collapsed on December 25th, 1991, leaving all 15 of the states newly independent, and the Armenia-Azerbaijan War intensified as the Soviet military left the region.

Through the late 80s and early 90s the Nagorno-Karabakh War raged on, ending in 1994 with an Armenian military victory. Approximately 17,000 people lost their lives in this war. Years of conflict ended with the signing of the Bishkek Protocol which froze the conflict.

Ever since the war in the 90s ended, small skirmishes over the years have plagued the region.

Tensions were high and the citizens of Nagorno- Karabakh knew that war could break out at any moment.

Professor Chavez at Mt Sac San Antonio College was asked the question, Do you think a conflict will spark up again in this region? “Unfortunately, the existence of the problem will ensure that the tension will eventually boil over, again,”

It is disputed on who the aggressor in this war was but what is known is that on Sept 27 2020, fighting began between Armenia and Azerbaijan over the Nagorno- Karabakh region.

The Armenians were supported through arms sales from Russia, a historic ally of Armenia. The Azeris were supported by both Turkey, who both share Turkish heritage, and Israel with weapons.

The majority of the war was fought with artillery fire bombing towns and villages.

Azerbaijan claimed victory, gaining control of 5 cities, 4 towns, and 240 villages, along with a corridor to connect the two parts of Azerbaijan previously split by Armenia.

The conflict ended with the signing of the 2020 Nagorno-Karabakh Ceasefire Agreement, signed by the leaders of Russia, Azerbaijan and Armenia. Although this conflict shows the ethnic tensions in Nagorno- Karabakh, it also shows the greater picture of the ongoing Turkish- Russian proxy wars that will likely shape the region in the future.

When Professor Chavez was asked the question if peace in the region is feasible?

His response was “Peace is always the ultimate human goal.  Is peace in the region possible? My own personally[sic] theory on global peace suggests a cold-turkey acceptance of our rivals as who they are, with no retribution or punishment. The past is what it is, it can’t be fixed, but we can learn and move forward in a more altruistic world. “